October 28th. Wow has the time gone by! It feels like just yesterday I was beginning my journey as a grade 9. However, that is surely not the case. I am now in grade 10 .. the last and final year of TALONS, and here I am struggling to find a person to study for the most important year of my life! UGH! Don’t you fear though, because yesterday at approximately 10:02 PM I saw the light. I found the person that I wanted to study, and she goes by the name Dana Hussein. 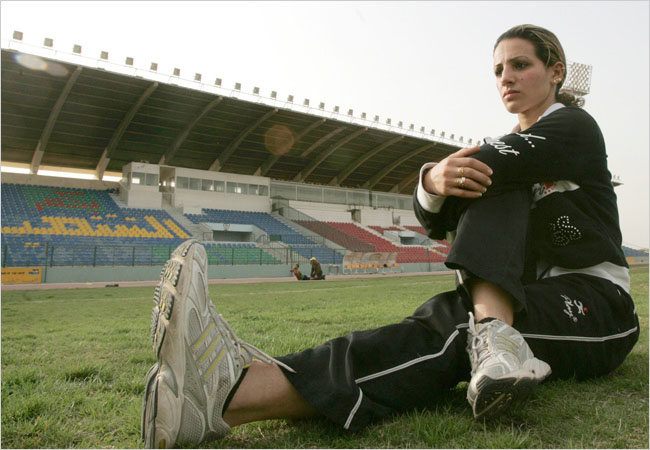 Although Dana has not won anything in the olympic level, I would say she is a successful athlete despite all the adversity that is faced with being an Iraqi woman. Born in a family where both parents were born and raised in Iraq, I know that it is difficult to enter the world of sports as a woman. Moreover, Dana was the only Iraqi athlete to train during the war filled country. At the time of Saddam Hussein, Dana never got a chance to run. Her parents were to scared to let her near any sports. But that didn’t stop her, Dana loved what she did and wanted to keep pushing herself to reach the Olympics one day.

Ever since the US invasion in Iraq in 2003, Dana laced up her shoes and took it to the track. However, she faced far more obstacles than just the rough patches of turf. She went through checkpoints, threats and bullets all to stop her from running. She didn’t let it get to her though, she continued to run, continued to work towards her goal of representing her country.

Today, Dana is proud and determined to represent her country. Despite all the obstacles and odds, her dreams still extend beyond the medals. “Sports can unify the Iraqi people – no Sunnis, no Shiites, just sport for the country” Dana says.